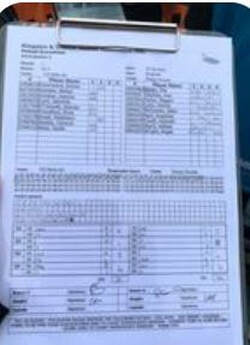 All scorers must wear a mask when inside the courts perimeter.

First name team scorers collect scorecards from court supervisors office and upon return removes score card, place in box, and pass pen and clip board to court supervisor for cleaning.

Scorers welcome to bring own pen.

No Coach and Scorer bibs will be used.

Each team must provide a non-participating scorer for all matches.

If a scorer is not present then a player/s from each team without a scorer will be asked to leave the court to ensure there is a scorer for the duration of the game.

Scorers to stand together for the duration of the match at the midway point of the sideline.

KDNA to provide the official Scoresheet.

One official Scoresheet will be used for each match. This Scoresheet will list the names of all eligible players, and each team shall clearly indicate the players intending to participate, prior to the commencement of play. This Scoresheet must also indicate at least the first position played by each player and the match score in 13&u, 15&u & 18&u.   11&u’s must have every position recorded.

Players named on the score sheet who do not take the court at any time during a match must be crossed off the score sheet – with one (1) line running through the name still allowing the name to be recognized by the Competitions Manager.

If a player's name is not on the scoresheet, player's VNA needs to be confirmed (if a player does not have VNA they can't go on court).  If they player does have VNA, the players's details (name, address, DOB, contact phone number, and VNA number) needs to be written on the back of the scoresheet.
​
If a team plays a player whose name has not been included on the score sheet or if a player has been named on the score sheet but has not played in the match, (not being a finals match) the offending team will lose four (4) points and the other team will be declared the winner.  Any goals scored by the offending team will be deleted from the score sheet.